I started this project as an way of getting my feet wet with building electronics. I ordered the Weird Sound Generator (WSG) kit from Music from Outer Space for $90 and set off designing the layout of the knobs and switches in my guitar. I decided to use this guitar because it was my first electric guitar over 10 years ago that I purchased so there was sentimental value. Plus, it was just sitting up in my attic collecting rust, so I thought as a WSG at least I would be able to get some use out of it.

I didn’t like the idea of having all the pre-drilled holes in the original pick guard that weren’t going to be used. So after some discussion with my brother-in-law, I came up with the idea of taking an old motherboard out of my computer bone yard and chop it up into a pick guard. To do that, I just traced the original onto the motherboard and carefully cut out the shape (my Dremel was infinitely helpful). There were a couple hours worth of chopping PCI slots, DIPs and other various components off the back side of the pick guard so it would lay flat when mounted, but that part was just fun. My garage smelled like burning CPU for days…usually I hate that smell, but this time was an exception.

Next I had to widen the internal area under the pick guard to make room for the pots and switches, not to mention a ton of cables that had to be fed. I also cut the truss rod out of the neck and drilled three holes for three momentary switches and used the old truss rod space to run the wires through to the body of the guitar. (I will have pictures soon) I also had to widen the area behind the guitar where the springs for the whammy bar usually live so I could mount the WSG PCB back there.

Next I mounted and wired all of the pots and switches and ran the cables through to the back side of the guitar where the WSG PCB now lives. A bit of documentation of each wire and some wiring and I was ready for a test. Everything worked beautifully (to my surprise) with the first shot. Finally I bought a 9V battery clip at Radio Shack and mounted that to the bridge, so now when I need to change the battery, all I have to do is remove the 2 screws that hold the bridge on and pull the whole thing out…it works out quite nice.

I hope you enjoy the pictures and sounds (yet to come) as much as I enjoyed building this gizmo. And for the love of electronics, go buy yourself one of these kits and get building! :) 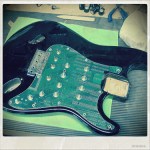 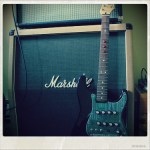 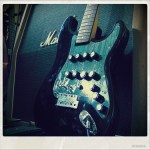